A downloadable game for Windows and Linux 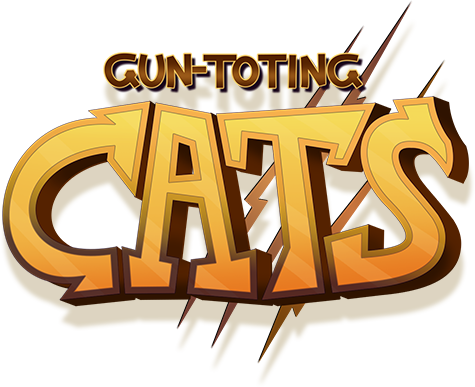 You're looking at a prototype for a platformer game!

It's purpose was mainly to test game functionality so don't be scared by the shi- ahem-  SIMPLE level design or an odd bug here and there.  The full game is already in the works and has become significantly improved, taking into account the feedback we've gotten from this.  100% less pits.

* Note:  Linux version is experimental.  We're not able to fully test the features so it may NOT work reliably.  Let us know.

Both of us play this and guess what happen

cool game i like that. It took up all my free time every day. bad ice cream 3 on hudgames is great

Thank you! I'm a little curious what kind of controller were you using? The game should be easier with the 360 aiming if you have analog sticks.

Thanks again for playing and making this video! :D

Works fine on Linux here, running under Ubuntu Mate 18.04 with an Nvidia card. Played single player with a controller, everything worked as expected, no problems at all and smooth as butter :)

Glad to see you guys are using Godot, looking forward to the full game!

Thanks for this feedback.  That is very good to hear.   X)

I recall there are a few bugs that had to be left behind in this project, but they do appear only rarely.

Thanks for sharing the specs too.  It can be hard to know how these builds are running on Linux generally across the distros.

We are steadily working away at it, and thankfully frameworks like Godot exist.

Very nice game.  I really like the concept!  It's Contra with cats, how great is that?

I played through level 1, you guys did a great job.

I hope the full game gets released at one point.

Thanks so much, glad you enjoyed it so far.  XD  It will take some time, but a game will certainly appear.  Along the way we hope to have some partial releases for alpha/beta testing.

Thanks, we're glad you liked it.  We're steadily and quietly working away on an improved version.

Had a lot of fun with this one even with the crashes.  Had a lot better luck with single player but in 2 player mode we ran into the following problems...1.  Once when one of us ran out of fish the game immediately went to the title screen. 2. When player 2 died off the screen stopped scrolling even though player one was still alive.  I hope to see more of this game in the future since it was a lot of fun.

Thanks so much for the kind review.  The video made me smile.  X)  Sorry about these rough edges we didn't have a chance to sand down.  When I see someone's experience get cut short like in your video, I'm always very tempted to go back and fix them.   Though I know that everyone who enjoyed this prototype will likely appreciate the new version we're focused on completing.

We can't wait to see what you have planed =D

Glad you enjoyed it, and sorry to hear about the controller issues.  Thanks for letting us know.

Unfortunately, this is only a gameplay prototype, and all our spare time is being invested on working on a full version.  I definitely would like to know more about the problem,  so at least it can be hammered out going forward if it still exists.  Maybe if it appears in the latest code and is similar enough, I can back port the fixes.

Is there a good place I can reach you?

Now that was a video full of energy! :D Thank you for playing!

We're glad to tell you the crashes at 3:43 and 5:05 have been fixed in the current version (1.8). They were caused by firing the grenade at close range.

Good to know :D thanks

this game was great! but when i played the game the mouse was gone i kept tryinng and it didnt work still briliant graphics!

Thank you very much! Glad you like the graphics! :D

Could you share with us your OS? So we can look into this problem.

Very glad to hear it! Thank you! :D

A 2nd, real review and gameplay. Thanks for the patch

Thanks again! Your help is much appreciated!

Crash aside it's been a nice shooting experience. You can definitely see it's very early stages but there is potential. :)

Aw man! Sorry about the crash. Could you tell us which operating system you're using?

Thanks for playing and making this video! Very nice! :D

Ah, it happens. OS is Windows 7. No crash can keep a trigger-happy cat down though. :)

Reply
Raithias1 year ago(+1)
No bugs on my play through. Great demo can't wait for more content on this Contra inspired game. Keep up the great work!
Reply
Kit9 Studio1 year ago

Thank you! And thanks for playing and sharing! :D You're exactly right about it being Contra inspired. Glad you like it so far!

Hi!! I just downloaded this game recently on MacOS, and I really do love the visuals of this game! However, I am a little disappointed that I can't really properly play it (not really sure if it's just me being stupid or a problem with the game). The game screen currently doesn't fit the desktop and a chunk of the game is hidden at the bottom. I can only move the game from side to side so the game features are very limited (can't go fullscreen or adjust the size either). Hoping you could fix this issue soon, super excited to play this game!! 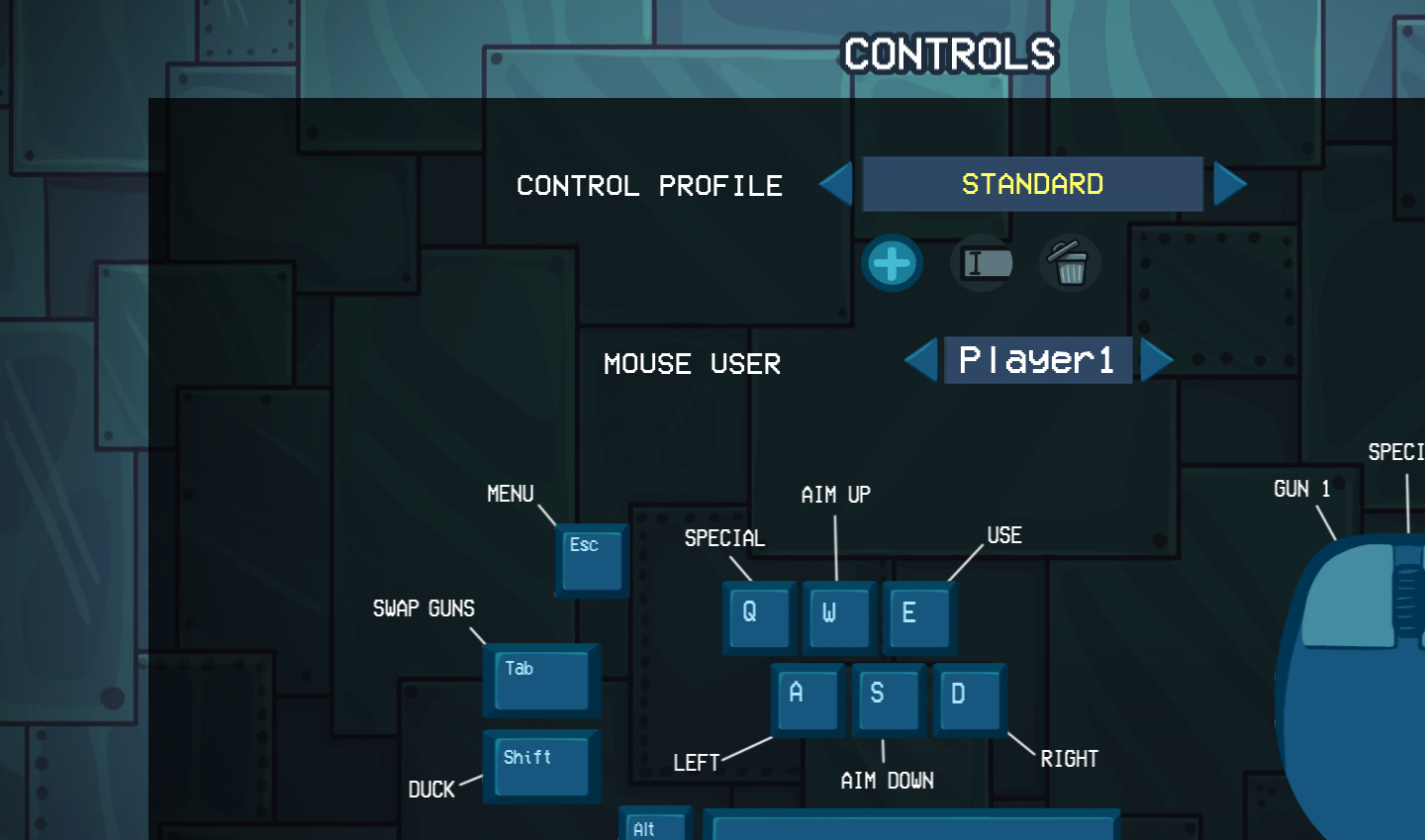 Thanks for letting us know. And sorry that it doesn't work.

We don't have a Mac, so we can't test it ourselves, and so far haven't found anyone to work with back and forth to fix it. Sadly it seems for nowwe can't support Mac.

Again, sorry for the inconvenience, and thank you for giving the game a try!

Very nice! Some sharp shooting with the fusion blasts. Thanks for making this! :D

Solid groundwork here! It's not perfect by any means, but given the description, you are well aware of that. I left a metric f***ton of feedback at the end of the video concerning the feel of the movement, the current state of the combat, weapons, all that, so I hope you find it useful! I really enjoyed my time with it even in this early state!

Wow, thanks for all this feedback, and taking the time to share it. Yes, there is quite a lot of work ahead of us. There is a bit of baggage from its origins as a Contra-themed game jam. We’ve extended from that, but going forward we’re going to be dropping the nostalgic mechanics. They’re too restrictive.

A lot of really good suggestions here. We are currently in the works of revamping the character movement system. Duck is getting dropped, and we plan on having an evasion move, as well as some wall climbing. Since, like you said, these are cats! The goal is to focus more on making them move nimbly with new environments to match.

The prototypes of these things may still be months ahead before they’re solid, but we were wondering if you might be interested in taking a look at them in closed testing when the time comes? We will need as much honest feedback as we can get to tune these things properly. 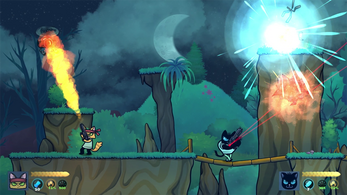 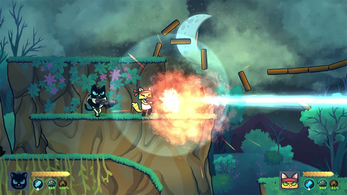 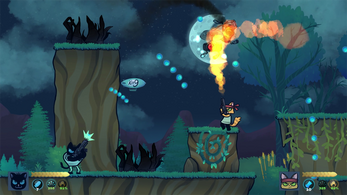